In this article we’ll take a bit of a journey through some mostly recent events and discover through Numerosymbology how symbols, the known language of the unconscious, have been employed to bring them about. We also have a brief squizz at next year. During the course of the article you will be shown how to interpret names and dates using basic Numerosymbology. The only maths skill you need is the ability to add up.

This is the template that reads alphabet and numeric symbols:

The alphabet letters are aligned with the biblical account of Creation in Genesis.
The circle of the template represents the Garden of Eden.

Just as this year – 2016, with its prominent 16, is according with 16’s nature bringing shocks and surprises involving 9 (its full frequency) and its characteristic departures, unleashed storms and plots, next year will invoke the frequencies of 17, 19, 10, and 1.

When you look at the figure for one (‘the man’ in Genesis) you can see that it is enclosed entirely in the template and not quite reaching the top. It is contained and alone, and in essence, just a line with a long pointed nose and one big foot. The nose is partially because ‘God’ breathed into his nostrils ‘the breath of life’. It has only one leg showing that it will be staying put (if we could call it a leg – it’s just a line really). Number 1 knows nothing and its presence is because something mysterious put it there.

‘The man’ is given dominion in the garden so he is depicted as tall, erect, as big as he can get – but clueless and impotent.

If I were to be asked, my view would be that humanity cannot afford the luxury of being as naive, witless, and dependent as the subliminal message of this number 1 goads it to be. Information is easy to find on most matters and there’s no excuse for not making reasonably informed decisions on many important matters.

In the lower case alphabet 1 is letter a; in the capital letters it is A. 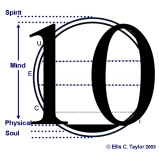 10 is Adam. He’s been learning, and he’s grown at least one. He’s ventured outside the Garden of Eden. 10 is eager to

This cipher, like many symbols, has multiple meanings. For one it is feminine and denotes the womb, so in this case it is feminine and offers potential.
It also represents the eye of ‘Lord God’, the all-seeing eye – even if, in Genesis he couldn’t see the man and the woman and didn’t know what had gone on. Things change from now on.
The point is that 0 represents nothing, or everything. At first it was blind and now it is ‘all seeing’. Once zero appears in 10 the blighter’s spying on Adam and what he’s up to all the time.

In 10, the zero, as all-encompassing, further indicates that number 1 has knowledge of the numbers between 2 and 9 (the woman told the man about the serpent – 3).

Number 10 is represented as j and J in their respective systems. Capital J is 36 in the combined alphabets.

Where 1 is the alpha, the beginning, 19 is the omega, for the 1-led journey. After this 2 takes charge.

When I first began studying numerology, 20 years ago, the books related 2 to the feminine. I don’t agree with that. My research shows that more accurately, it is the integrated human, male and female, but with the feminine side of its character the more dominant and aware. We’re talking about the right (feminine) and left hemispheres (male) of our brain and the unconscious (feminine) and conscious/intellect (male) of our minds. However this growing energetic influence on our world that began to make itself noticeable in the 20th Century (note the 2) and unmissable now we’ve hit the 2000s is also manifesting itself too. Bisexual and transgender issues and prominent women with male characters are symptoms of this: one of them is currently going balls-out for the presidency of the United States. Another example was British battle-axe, and prime minister, Margaret Thatcher.

Did I mention that 1 is a component of every number? They are all formed from lines.

The masculine energy (programmed) is in a corner and it’s not been going quietly – since it spotted 2 on the horizon in the late 1800s. We’ve had two world wars since then and countless bloodbaths in other conflagrations, invasions, rebellions, despotic clamp-downs, environmental catastrophes, and endlessly more. 911, in 2001(2 and 1, with 0s) and the London Bombings of 7th July 2005 (adds to 21 – 2 and 1), which we’ll look at further later on,  were among the latest major attempts by 1 and its legions to take charge again.

Another major opportunity it aimed all of its arsenal at, and had done for centuries, was 11:11am on 21st December 2012 – 21/12/2012; out-gunned in the date, it more than made up for it with its clock time: 7 to 4, which adds together in its favour by totalling 11. It won all three of these frequency battles. The windows are closing, that makes 2017 very dangerous. The figure for 2 unfortunately bows to 1 in the numeric system: 12, and as ultimately 1 on its own is inept and entirely under the control of an unseen force it, through 1, is subservient to that too. This is all designed by whatever it is that possessed the humans that cast the numeric and communication symbols we have allowed in.

Number 19 applies to s in lower case and S in capitals. In the combined alphabets capital S has a value of 45.

This site uses Akismet to reduce spam. Learn how your comment data is processed.